Annual Statements are now available online. Members can access them when they sign into their online accounts.

For more information about Annual Statements and our most frequently asked questions, please visit our webpage.

Turning the Page on Grief

Retired library administrator starts a new chapter of healing after losing her son.

As Harris County Public Library (HCPL) Collection Development Manager Elaine Plotkin neared the latter stages of what ended up being a rewarding 40-year career in library administration, she already knew how she wanted to spend the next chapter of her life.

She wanted to travel the country visiting libraries and literature-related landmarks. She wanted to pursue her cooking hobby and gift beautifully prepared dishes to HCPL staff and retirees, loved ones and those facing hardship.

And most importantly, she wanted to spend quality time with her husband, Ronnie, their oldest son, Jason, and his wife Aliza, and their youngest son, Raymond.

But what happened in 2009 forced Elaine to put that book down for a time.

Three months after dropping 18-year-old Raymond off at the University of New Mexico for his first year of college, he contracted the H1N1 (swine) flu and passed away within five days.

“It was a parent’s worst nightmare,” Elaine says. “Ronnie and I were in shock and were pretty much going through the motions of living and existing in a world where our youngest son was no longer a part.”

Knowing she and Ronnie would need help navigating this devastating loss, Elaine went to the best place she knew for finding information: the library. There, a contact told her about a support group for grieving families called The Compassionate Friends (TCF).

Six days after losing Raymond, Ronnie and Elaine attended a meeting of the local TCF chapter and found profound solace.

“To be able to sit in a room informally and meet other parents who have suffered a similar loss to your own makes a huge difference,” Elaine says. “To see other people smiling, laughing, and talking about their children gives bereaved parents what they need the most: hope.”

“You won’t ever get over the loss of your child, but you can get through the grief,” she adds. “In the TCF community, you can unload those feelings without guilt or anyone telling you to ‘get over it.’” 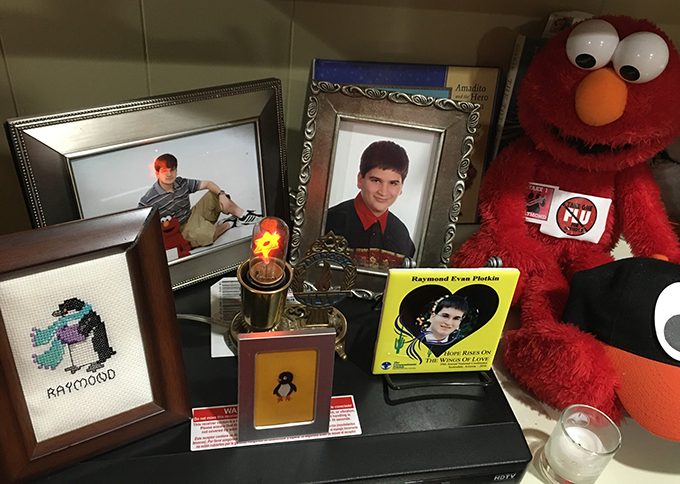 To keep Raymond forever present in their lives, Elaine and Ronnie keep a memorial to him in their family room.

HCPL factored heavily into Elaine’s healing process as well. Continuing to work at the library provided her with a sense of stability and purpose, and her HCPL co-workers provided “tremendous support during a very difficult time.”

“I never forgot their kindness and sincere concern,” Elaine says, adding that it wasn’t long before she got to pay it forward.

When other HCPL staff members lost loved ones, Elaine would always reach out to them. “It’s really more about listening and letting the other person know that you are there for them, and there is hope.”

In 2012, Elaine and Ronnie experienced another turning point in their healing journey when they attended their first national TCF conference in California. Being around so many other grieving families inspired them to create a “living legacy” that honored Raymond’s big heart for others.

Elaine and Ronnie worked with UNM to create an engineering scholarship in Raymond’s memory and an annual flu shot clinic for students called “Take One for Raymond.” They also created a Maccabi tennis scholarship at the Houston Jewish Community Center, celebrating Raymond’s love for the sport. 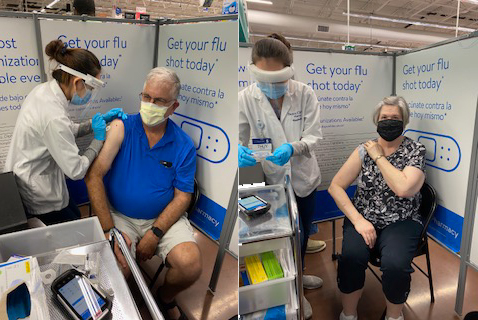 Ronnie (left) and Elaine (right) receive their flu shots at their home pharmacy during the
UNM’s “Take One For Raymond” flu shot clinic in Sept. 2020. Photos courtesy of Elaine Plotkin

“We have learned to celebrate Raymond’s life and not dwell on the one day of his death,” Elaine says. “I really feel we have done that. We are paying it forward for our Raymond.”

In 2016, Elaine decided it was time to start a new chapter — retirement.

She’s grateful for her TCDRS benefit because it allowed Ronnie to retire early from the steel industry and take the time he needed to cope with losing Raymond. “It’s my retirement from 40 years of service that has sustained us,” she says.

Now, Elaine is busier than ever and views retirement as a period of “lifelong learning.” When she isn’t cooking, traveling or attending TCF or HCPL Retiree Group meetings, she is taking classes, attending social gatherings or spending time with her grandson, Isaac. 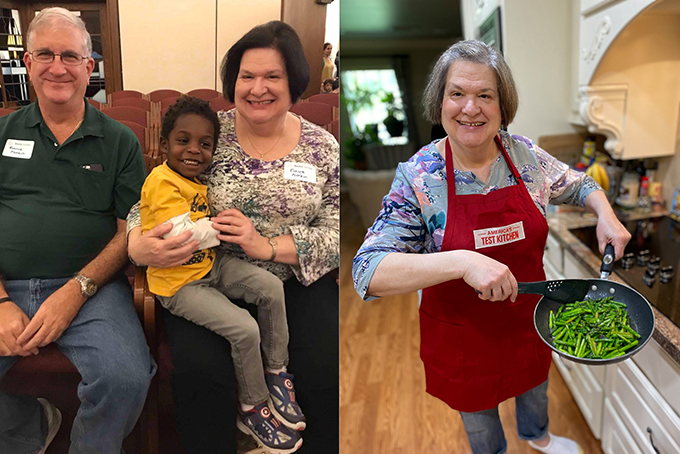 She’s learning a lot about herself, too. For example, she has discovered the source of her most infamous cooking mistakes, such as missing ingredients. “I had a habit of skimming recipes and not actually reading them,” she says. “That comes from reading thousands of library book reviews and scanning for the major points.”

“I’m happy to report that I can, after five years of effort, follow a recipe from start to finish and have all the ingredients on hand,” she laughs.

If you are a HCPL retiree and would like to join the Retiree Group, please email txlibrary@aol.com.

If you have lost someone and need support, you can visit CompassionateFriends.org to find a chapter meeting in your area.

Feeling Isolated? You’re Not AloneHow to Keep Friendships Strong — Even When You’re Apart

Cooking up a second career in retirement

Retired Harris County Deputy Sheriff Rayford Busch spent decades perfecting his barbecuing process. So when he retired, he was ready ...

Benefits on Her Radar

TCDRS member Halley Challis started her career with the Brazos County Emergency Communications District (BC911) in 2007, when she was...

How You Know When It’s Time to Retire

Whether your retirement date is nearby or far off, a little information from someone who’s already there can help you plan for it.